Jess and I tackled one of the larger peaks in the area, Mount Toby. Temperatures were in the low 90s as we hit the trail. From the trailhead on Reservation Road, we took the Robert Frost Trail out, then followed the power line trail straight up the side of the mountain. And by straight up, we mean straight up. The last half mile had about 400 feet of elevation gain. It was strenuous, but a good workout was had by all! 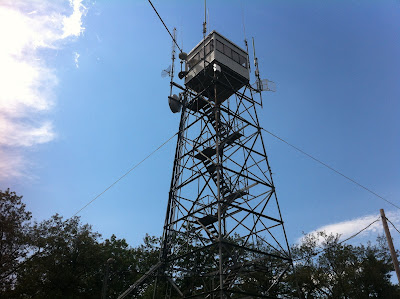 The summit is circled by trees, but the nine-story fire tower (turned antenna farm) offers a stiff breeze and a full 360 degree view of the valley and surrounding peaks. There were a number of picnic tables, as well.

I had trouble making it out on 20m today. Nearly all stations who were not local were reporting fading on my signal, which makes me suspicious that something might have been wrong with the rig or antenna setup. Maybe I put it too close to the guy wires for the fire tower? I wasn’t able to achieve a good SWR as I normally do.

I worked a lot of the regular SOTA chasers like AJ5C, WA2USA, as well as the local SOTA guys. I even worked a husband/wife pair back-to-back with consecutive callsigns: KB1RJC and KB1RJD! Pretty cool. I was also able to land YT1A (Serbia!) and N4PN who were working the Canada Day contest.

N1FJ also took the time to work me on CW, which was a treat. I’m not very fast at CW yet, so I did not copy most of what he sent, but I was able to review it in the video later.

We talked to some other hikers at the summit and determined the best way down was Tower Road, a dirt access road that was a big longer in distance, but much less steep. It made for a pleasant trek down, which was good because some storm cells were in the area. Luckily, the weather stayed to our south, and we had sunny skies the rest of the day.