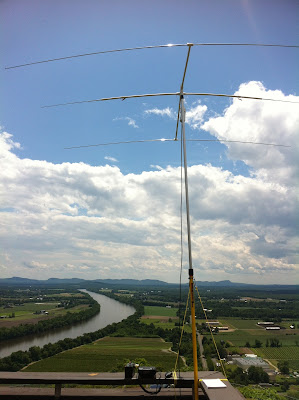 Having only recently acquired a radio that supports 50 MHz, I didn’t have a lot of experience on the lowest VHF band until now. In preparation, I constructed a modification to the homebrew Buddipole that converts it into a 3-element Yagi (plans forthcoming). All elements are Buddipole “Featherweight” telescopic whips that are lightweight, portable, and adjustable.

Saturday afternoon I drove to my perennial radio spot: Mount Sugarloaf in Sunderland, Massachusetts. The state reservation boasts a 400 foot elevation gain over the surrounding area, with sheer cliffs and a great observation deck overlooking the Connecticut River valley.

Most importantly, it has a clear view of the west, south, and east.

Saturday afternoon was fun. I operated from the mountain from the beginning of the contest, 1800Z, until to 2230Z (2 to 6:30 PM local time). Most contacts were local, but a number of Florida stations soon came through! I packed it up with 53 SSB QSOs under my belt, most of them 100W. I also pulled out the 2m tape measure Yagi and had some fun with local contacts on FM and SSB. 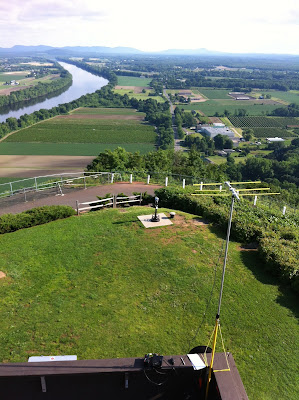 I hopped on again Sunday afternoon around 2100Z, this time portable on the lawn outside my apartment. The band was dead, dead, dead. I had a nice ragchew with Thomas, KA1MDA, to pass the time.

First, Thomas worked MW0ZZK in Wales and pointed me to his frequency. Just like that, I got my first DX VHF contact. Next was W0OGH in Arizona. Suddenly Canada, Alabama, Nevada, and Montana all started rolling in. I continued to knock out QSOs until the sun went down and my battery was finally drained, which was around 0115Z.

It was amazing to hear different “hot spots” come in from around the country. Sometimes the signal fading was so severe at times that a station would disappear in the time it took me to send my callsign. Such is the nature of the Magic Band, I suppose.

With VHF antennas being so small, this was a fun contest to operate portable. The 6m beam really proved its worth, and I was surprised to get 4.5 hours out of the battery running 100W the entire time. I probably could have gotten by with lower power, but at least now I have a good benchmark.